Dear fantastic followers, I have just returned home to the welcoming drizzle of Blighty from a rather warmer altogether more spicy Arabian Tour.

This was unbelievably my 5th time around the sandy oil filled lands, and it was my first experience of it being cloudy, cold and windy all the way around the course.

We started out in Muscat, the head quarters of Oman Sail and met up as a team for the first time. This year our team comprised of Annemieke Bes (Dutch silver olympic medalist in the yngling), Libby Greenhalgh (Team GB meteorologist and navigator from SCA Volvo Ocean Race team), Hannah Diamond (Nacra Team GB sailor).

And the four beautiful Omani Ladies you see below, Ipti (our helm, also on her 5th tour) Tami (Downwind trim, 2nd time around) and Marwa (Upwind trimmer on her 3rd tour) and newbee Hajar our new pit lady and tour virgin.

We started out with a few classroom sessions, to remind ourselves how to get the boat around the course and do the basics as well as possible.

This year we were joined by a new and fabulous sponsor DB Schenker, the global logistic giants who operate in 130 countries around the world.

Hannah was very excited to get the tour started, here she is bounding down to the boats.

The first leg was uncharacteristically windy and after a little delay due to the enormous wind and waves, we were straight in to a kite hoist and tight reaching to get around the first headland.

The Farr 30 is a wonderful boat, fast and responsive however when on a reach it is like being inside a water fountain. The water seems to be funnelled up the sides of the boat and there is no safe place, everything and everywhere was soaked within 2 minutes. Downstairs a constant bailing out programme has to be adopted and anything not deep inside a dry bag is turned to soggy mess.

As I was in Arabia and the weather is ‘never like this’ I was somewhat underprepared in my trainers and ‘waterproof’ socks. The water went in my face, up my shoes, down my socks, up my trousers, down my jacket, the optimum outfit would have been a swimming costume. As the sun went down at 6pm and the night stretched out ahead it was evident this leg was going to be wet, cold and dark. We had a couple too many broaches in the middle of the night and couldn’t quite match the speed of the other teams coming in in 7th place for the leg. 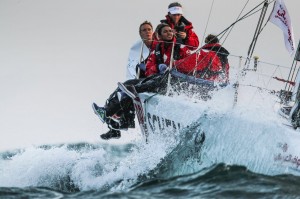 Finally we did make it to Sohar and after drying out we were welcomed by some fantastic traditional Omani merriment.

The next leg start was on yet another grey mizzly day this time with lighter winds and big wind shifts. We started off this leg well and held with the pack deep into the long 12 hours of darkness.

In the final straight to the finish we sailed around the very top of Oman and had a tight battle with the Italian and and British boys teams, coming out on top and in 5th position for the leg.

Here Tami, Hajar and myself are hiking really hard!

It was lovely to get to Khasab, which is my favourite stop on the tour with its enormous mountains and valley’s its absolutely stunning. However the weather did not perform and here are Hannah and myself wrapped up on the beach.

One of my duties for each leg was the food supply shopping and Khasab is a very traditional small village so the supermarket was a very interesting place. There was not a cereal bar to be found but if you were in the market for some rice, this was THE place to be.

Also cooking oil, anything fried was evidently the way to cook in these parts!

We were very lucky on our afternoon off Mark lloyd the very talented event photographer had an idea for a photoshoot with the girls team on Telegraph Island. This is a tiny rock in the middle of a huge canyon was an old British outpost, from which a cable was run to India in the 1860’s.

Reportedly, every single man stationed at the outpost “around the bend” of the Musandam peninsula completely lost his mind from the monotony and heat. Stuck for months on the football-field sized island, cut off from the outside world, and subject to intense desert heat, the solders were slowly driven mad.

But today used for fishing and snorkelling only the crumbled ruins of a building remain and it was a truly spectacular afternoon.

Before we knew it we were off again and with plenty of breeze we had an amazing day beating up the coast with the huge cliffs behind us, the turquoise water was rough and bouncy but we were again amongst the leaders and in the fight.

Sadly for us the wind died and in the darkness we lost slight of the other boats and continuing to play the shifts we ended up offshore compared to the fleet where we suffered much less wind and although on a good shift, we were much slower and lost out at the finish line in Abu Dhabi.

Part of our Abu Dhabi experience we got to visit the Grand Mosque which I can report has more round balls on top than the Oman Grand Mosque.

Inside there were big chandeliers with red, green and gold coloured balls which reminded us of Christmas, but apparently they were palm trees and the balls were dates?! See below James from Averda is very confused.

Refuelled on some highly nutritious athlete snacks, we were almost ready to go again.

Each leg required a briefing, explaining the course, the expected weather and our strategy for the race from Libby.

And we were off on Leg 4 to Dohar, Qatar. This was the only leg where we had a bad forecast, no wind for the middle of the night.

So the race officer in his wisdom split the leg into two parts racing until darkness, motoring through the night allowing us all to get some good sleep and then re starting, part two as dawn came.

It worked perfectly in terms of breeze but although the racing was close and we finished both parts within shouting distance of all the other teams, we didn’t manage to get around them, finishing in 8th position.

Here is Hannah very happy to see the sky scrapers of Dohar .

Even happier Libby and myself finally in our hotel dressing downs, clean and sleepy ready for some hard core recuperation.

With a tiny bit of time to spare I decided to venture outside the sanctuary of the hotel and finally flagged down a ride on a local donkey, it was was very tall and knobbly with rather envious eyelashes.

She tried to flick me off a few times but I held fast.

I found some local lads to hang out with and they took us up some sand hills in their 4×4 which was highly terrifying skidding down sideways, but they didn’t seem too bothered and with their pristine outfits I presumed it wouldn’t get to a brown trouser situation.

We had one day of in-port racing however the weather didn’t want to play ball and provided the bemused spectators with an unspectacular spectacle.

Our big moment of glory did come eventually, drifting across the line at just over two knots of boat speed, to take the first win of the day.

Leg 5, the final straight to Dubai started off on a sunny morning and as we all ripped away from the gas fields of Qatar we hoisted the spinnaker and never looked back. This was a very tricky leg with lots of oil fields and sand banks not to mention the heavy sea traffic all to be avoided at all times of day and night.

It was finally warm and sunny and working really hard we sailed into the finish of the second day at sea, in 6th position.

Sadly following our finish we found out that we had strayed into the edge of a deadly forbidden zone and despite trying to fight it we received a disqualification from the leg.

And so during a visit to the DB Schenker warehouse, they tried to lock us away in a box!….

But we managed to escape in time for the final day of pointy finger, in-port race action.

(Pretty sure there was a dolphin.)

With the final spinnaker hoist in front of this spectacular skyline we said good-buy to the sunshine, a fabulous team and a slightly less warm than usual, 2017 Sailing Tour of Arabia.

Less than 24 hours later I was back in England in my boat wearing moderately  more layers, about to cross the Channel and on my way to France.

With storm Doris on its way we had a short weather window to get over to the location of the first Figaro race, Granville. Following a windy night the sun came out and we had a lovely sail down the west coast, avoiding the showers and finally arriving in our new home.

I am now fully on track for the Figaro season and can’t wait to get stuck in sailing on my own again.

p.s All the good photos are credit to Lloyd images. The crap ones are my iPhone.

We use cookies to ensure that we give you the best experience on our website. If you continue to use this site we will assume that you are happy with it.Close Message